BCM attended ACHEMA in Frankfurt, Germany last week where industry 4.0 was the hot topic. But does anyone actually know what industry 4.0 is?

Firstly, it isn’t a new technology. The concept behind industry 4.0 has been around for over a decade in industrial plants, but only recent technological advancements have made it possible. Many are calling it the fourth industrial revolution.

The German government kicked things off back in 2013 through a high-tech strategy document that outlined a plant to almost fully computerize the manufacturing industry without the need for human involvement.

Angela Merkel, German chancellor spoke glowingly of industry 4.0, calling it the way that we “deal quickly with the fusion of the online world and the world of industrial production.”

In Victorian times, the introduction of mechanical production systems powered by steam and water started the first industrial revolution. Next, the invention of electricity brought new ways to power mechanical production systems through steam and water in the 19th century. The third industrial revolution centered on the use of electronics and IT to automate levels of industry.

Now we arrive at Industry 4.0, the era where sensor technology and the Internet of things (interconnectivity of machines) are driving the industry forward through digitization. So what is a smart factory? It’s where computers and robots run all the physical functions wirelessly. Humans still maintain control over the machines through programming; we tell them to do the heavy lifting and how/when/where to do it. 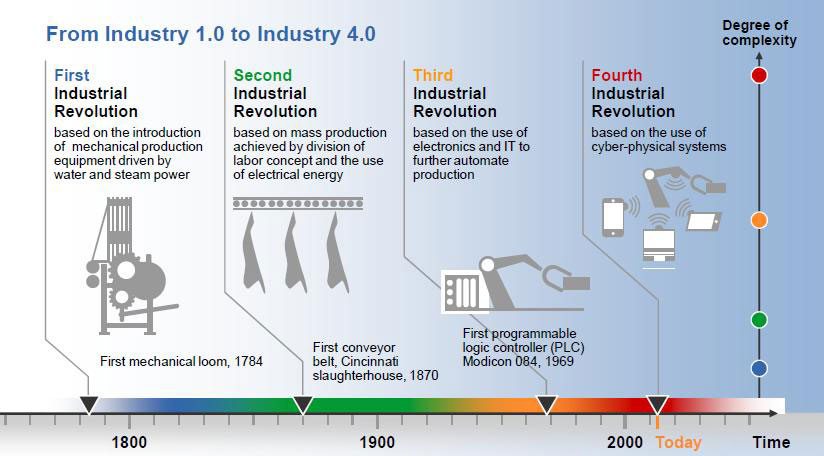 Industry 4.0 could be worth trillions, not billions. According to a report by Accenture in January 2015, it concluded that an industrial-scale version of the Internet of Things, or industry 4.0 could add $14.2 trillion to the world’s economy over the next 15 years. The UK alone could benefit by up to $531 billion.

The hype towards industry 4.0 has been gathering pace, and for good reason, a completely automated factory could change the face of manufacturing, simplifying the industry, giving higher production and reducing costs- what’s not to like?

Ignore I4.0 at your peril